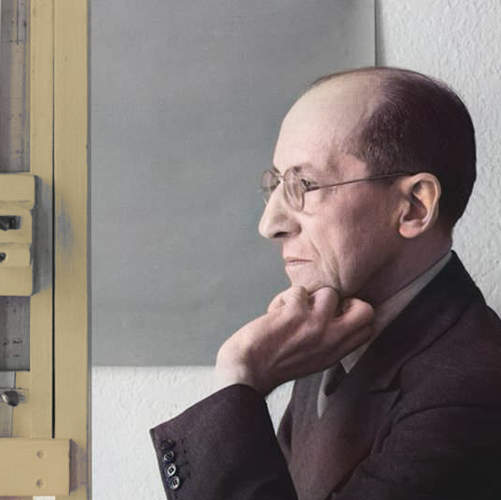 Piet Mondrian: The Life of an Artist

Piet Mondrian, radically simplified the elements of his paintings to reflect what he saw as the spiritual order underlying the visible world.

Piet Mondrian was a pioneer of abstract painting and was born in Amersfoort in Holland on the 7th of March 1872. In 1880 he moved to Winterswijk when his father, who was a qualified drawing teacher, became headmaster of the local Christian school. At sixteen, he left school to study drawing and painting and passed his lower certificate examination in 1889, which allowed him to teach at his father’s primary school. In his free time, he painted landscapes in a rather traditional fashion.

In 1892 Piet Mondrian moved to Amsterdam and entered The Rijksacademie. He left three years later and earned his living making copies of famous paintings. In 1897 he became a member of St. Lucas, the Artists Association for students at the Rijksacademie and for the next few years continued working by painting copies of museum paintings and producing scientific drawings.

During this period, Piet Mondrian started to exhibit his own landscape painting. His painting was much influenced by the Hague School, a group of Dutch artists who took their inspiration from the idealised and naturalistic painting of the French Barbizon movement of the 1830’s and 40’s. He had little success selling these paintings.
In 1905 he saw an exhibition of the early work of Vincent van Gogh in Amsterdam which had a profound effect on him, influencing him to use bold colour and more vibrant brushwork.

The Fascination with Trees

Piet Mondrian was inspired from very early in his career by his fascination for trees. He seemed to be attracted to the problem of how branches, twigs, sky and foliage interact with each other. He enjoyed the rhythmic structure they represented and how that could be represented on a canvas.

During this time, Piet Mondrian exhibited a lot of work, but despite developing a reputation for evening landscape paintings, he still sold very little. In 1908 he visited Domburg where he met several avant-garde artists, including the Dutch artist Jan Toorop. These artists were very interested in Divisionism, which put simply means, the application of colour in small separate blocks, similar to Pointillist painting.

In 1911 Piet Mondrian exhibited work in Nantes and Paris and saw the Cubist Paintings of Picasso for the first time. He moved to Paris and almost married his friend Greta but changed his mind at the last minute. Some of his
abstracted paintings were sent to the Galerie der Sturm in Berlin but sales were very limited.

Trees were still an important source of inspiration, but Mondrian’s paintings were developing. Negative space, the shapes between the branches, became as important as the branches themselves. You’ll notice how these shapes and lines are organised into a structure which is not a tree, but the spirit of the tree. By the end of 1913, his subject matter began to move away from the heavy reliance on trees as objects, to a more spiritual interpretation of the world.

In 1914 Piet Mondrian visited the Netherlands to visit his sick father, but was unable to return to Paris until 1918, because of the First World War. During this enforced exile, he got to know the artist and critic Theo van Doesburg, who admired his abstract compositions. But despite this, Mondrian was still surviving by making copies of other art works.

In 1917 he submitted his ideas about painting in a manuscript called ‘The New Plastic in Painting’ or Neo-Plasticism as it became known, to a new magazine called De Stijl, The Style. Neo-Plasticism, or a better term might be New Art, described Mondrian’s vision of an ideal, pure form of art and design. He felt, after the chaos and slaughter of the first World War, art demanded and deserved a better art.

It was to be a pure type of abstract art, influenced in part by Cubism and Suprematism and designed to adhere to strict rules of composition. The idea was to strip out all naturalism and other inessentials from painting in order to attain the universal truths as outlined by Theosophical movement. This period saw all representations of reality disappear from his paintings. His main aim from now on was to express the relationships between colour and shape, rather than objects in his paintings. He did this by using line and coloured shapes.

Move back to Paris

In 1919, before moving back to Paris, he packed up all the naturalistic paintings he’d painted during the war and sold them to the art dealer, Sal Slijper. He was determined to break away from the past and to paint his first neoplastic abstract painting composition, Composition A.

Like Henri Matisse would do in the 1950’s, Piet Mondrian began to experiment with cutting out coloured squares in paper and putting them on his wall. He was seeking to create, balance and harmony with colour and line. He believed this could be achieved even if there was discord between the various elements.
In 1921 he moved back into his former studio in the Rue de Depart where he had lived in 1914. The studio was organised according to the rules of neoplasticism and its radical layout became a huge talking point amongst journalists and interior designers. Through their writings, Piet Mondrian became known to a wider public and during the next few years, he wrote more articles about neoplasticism and his great love of music.

But his main source of income was still being generated from painting watercolours of flowers and still lives. However, in 1925, his fortunes began to change. More and more people visited his studio and showed an interest in purchasing his abstract paintings, even his experimental diamond shaped pictures. It was during this year that he sold his first painting to a French collector.
In 1926 he exhibited work in Dresden and Munich and made contact with collectors from Switzerland and the United States. He continued to write articles on neoplasticism and jazz. In fact his love of American music and dance drove him to declare he would never go back to the Netherlands, if the dance the Charleston, was banned.

1929 saw his first paintings sold to Katherine Dreier in New York. His abstract paintings were beginning to sell and he told friends, that he had no more time to paint flowers and still lives. His painting was becoming more radical and by 1931 colour was beginning to disappear from his work to be dominated by white planes and black lines which differed in width.

1932 saw Mondrian develop the idea of line in his painting by simply repeating them. This became known as his double line paintings. His paintings were now selling well, particularly those with the double lines. His painting, Composition with Yellow Lines, was bought by friends and offered by them to the Stedelijk Museum in Amsterdam, but they refused it.

However, in 1934 he met the English abstract artists Barbara Hepworth and Ben Nicholson and heard the music of Louis Armstrong for the very first time. But his health was declining and he became seriously ill and was unable to paint for most of 1935. Yet his abstract painting was becoming more and more popular selling well in Great Britain and the United States. In Germany the reaction was quite different. Under Hitler’s regime, his abstract painting was declared degenerate and examples were included in the infamous degenerate art exhibition, held in Munich, in 1937.
Under the Hitler’s cultural policy degenerate art was art seen, ‘as an insult to German feeling’ and included all modernist painting, even that produced by German artists, internationally renowned artists such as Picasso and of course, any work by artists of Jewish or Bolshevik origin.

The move to England then New York

In 1938 Mondrian left France for England and created a new studio which, this time, he painted completely white. But he was not in England for long, because during the Blitz in 1940, a German bomb landed close to his studio, destroying several houses. So, he left for New York.

New York fascinated him, he liked the street lights, such a contrast to the enforced blackout designed to mitigate night time bombing, that he had experienced in Britain. Piet Mondrian loved the jazz, and the sheer novelty of New York. He even seemed to love the traffic, maybe, because the transport grid system appealed to his sense of order and followed his ideas of neoplasticism.

It was in New York that he first experienced the dance craze, the boogie woogie. This experience had a profound effect on his painting. To such an extent that he began to change the paintings he had brought from England by painting small colour planes to replace the black lines.

His last completed painting, The Broadway Boogie Woogie of 1942 seems to reflect the influence of New York but can also be seen as the culmination of his life’s work. In many ways the painting reflects the coming together of the two sides of his personality.

On the one side, his love of rhythm exemplified by the boogie woogie and on the other, his love of balance and order. His experience of the daily rhythm of New York, the pulsating movement of Broadway, especially at night, contrasted with the principles of Neo Plasticism. From these contrasts and contradictions, he created harmony.

Piet Mondrian died on the 31st of January 1944 age 71, one of the true pioneers of abstract painting. 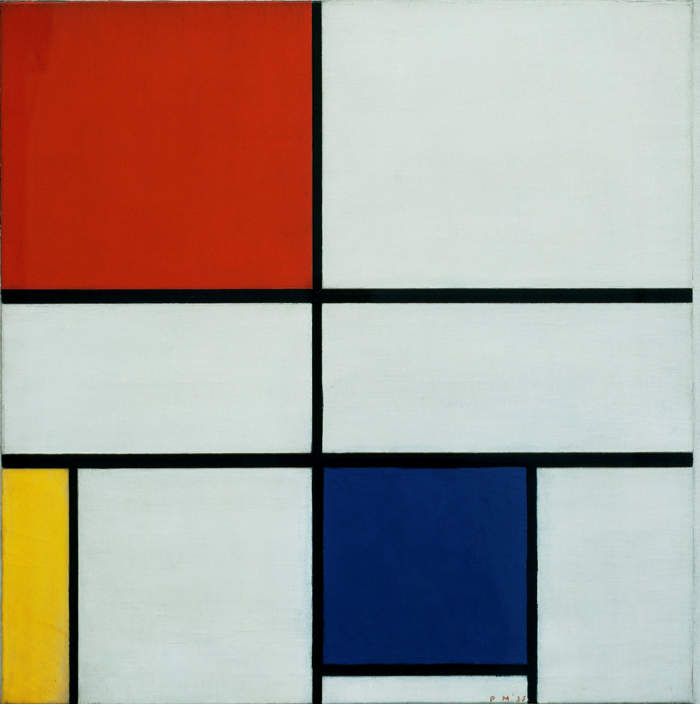