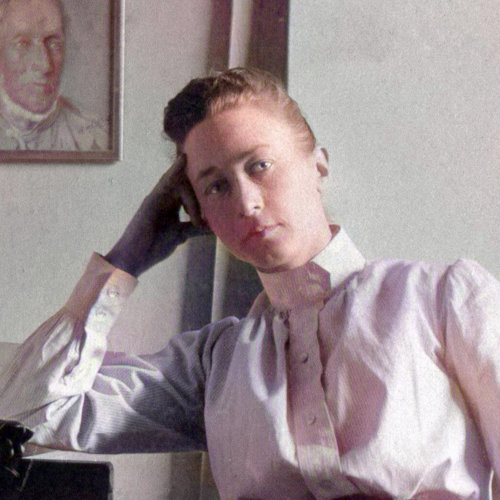 Hilma af Klint: The Life of an Artist

Hilma af Klint was influenced by spiritualism and Theosophy and her first abstract painting, created in 1906, pre-dated Kandinsky’s by five years.

Hilma af Klint was born on 26 October 1862, at the Karlberg Palace in Solna, Sweden, the naval academy where her father was based. She was the fourth of five children born to Mathilda and Victor af Klint who were staunch Protestants. Most of her childhood was spent in the Karlberg Palace, but during the summers, the family would move to Adelso, an island in Lake Malaren, near Stockholm. It was here that Hilma’s fascination with nature and organic life began.

In 1872 the family moved to Stockholm where Hilma attended the General School for Girls. In 1880 she moved on to the Technical School, now known as Konstfack, and studied classical portraiture under the supervision of the artist Kerstin Cardon. Around this time, she began to develop an interest in the spiritual and the occult. These interests grew following the death of her ten-year-old sister, Hermina when Hilma was eighteen years old.

At the age of 20 in 1882, Hilma enrolled at the Royal Academy of Fine Arts in Stockholm. She was one of the first women to do so and spent the next five years studying drawing, portraiture and landscape painting. Here she met fellow student Anna Cassel who became a lifelong friend. At this time Hilma painted landscapes and portraits very successfully and this quickly became the source of her financial independence and stability.

In 1889 the Swedish Theosophical Society was founded in the house of the writer Viktor Rydberg and Hilma af Klint soon became a member. In 1896 she joined the Edelweiss Society but left soon after with four other like-minded women artists and founded the “Friday Group”, also known as “The Five”. They met every Friday for spiritual meetings, including prayers, studies of the New Testament, meditation and séances. The medium, Sigrid Hedman, was one of the five, led exercises in automatic writing, a form of writing and drawing which began with no preconceived subject or composition in mind. This idea was decades before the Surrealists would use automatic drawing to generate their ideas.

The Five established contact with spiritual beings whom they called “The High Masters” and received messages through a psychograph. In 1904 Hilma af Klint’s work profoundly changed after what can only be described as an otherworldly experience. During a séance, she claimed to have heard a voice telling her to make paintings ‘on an astral plane’ in order to ‘proclaim a new philosophy of life’.

So, in November 1906 at age 44, Hilma af Klint began painting, ‘The Paintings for the Temple,’ which comprised several series of paintings on various themes. The first, group was called Primordial Chaos and according to Hilma af Klint, were created under the guidance of a ‘High Master’. The paintings broke free entirely from representation, combining geometric shapes such as spirals with dynamic brushstrokes, letters of the alphabet and symbols. She decided to keep these works secret.

In 1908, Rudolf Steiner, leader of the German Theosophical Society, held several lectures in Stockholm. On one occasion he visited Hilma af Klint’s studio and saw some of her paintings and declared he could not decipher them and doubted anyone one would in the next 50 years.

Theosophy as an Inspiration

Hilma af Klint shared an interest in the spiritual with the other pioneers of abstract art including Wassily Kandinsky, Kazimir Malevich, and Piet Mondrian. And like Hilma af Klint they were drawn to Theosophy, which opened a route towards a new world of spiritual reality, rather than merely depicting visual impressions of the world around them. To Hilma af Klint her spiritual guides, were as real as the impressions provided by her physical senses. By visualising these inner processes and experiences and giving them visual form, she created a highly idiosyncratic form of expression.

In 1911 Hilma af Klint’s early naturalist paintings were exhibited by the Association of Swedish Women Artists at the Royal Academy of Fine Arts in Stockholm. In 1914 she exhibited naturalistic paintings at the Baltic exhibition in Malmö, with artists from the Nordic and Baltic countries as well as Germany, and Russia . She was convinced the world was not ready for her abstract paintings.

1916 saw Hilma af Klint develop her studies of the spiritual further. The Parsifal Series, a numbered sequence of 144 works on paper, resulted from this study. The series title may refer to the Arthurian legend in which Parsifal, one of the Knights of the Round Table, took part in the quest for the Holy Grail and like the legend of the Holy Grail, the paintings represent a search for spiritual knowledge.

The later “Atoms” series was concerned with the world beyond the observable world; x rays, sound waves, atoms, subatomic particles and the like. Hilma af Klint created a visual equivalent of this hidden existence.

1920 was an intensely creative year for Hilma af Klint. In several series of small oil paintings, she explored the great world religions. She saw religions as based on duality, that is, a division into opposites, such as good and evil, order and chaos. None of them appeared to Hilma af Klint to attain unity. Later, in 1920 following the death of her mother, Hilma and Thomasine Andersson, moved to Helsingborg where Hilma joined the Anthroposophical Society. Later they visited Dornach in Switzerland, where Hilma again met Rudolf Steiner, a founder member of the Anthroposophical society. Influenced by his views, Hilma af Klint gave up painting geometric compositions. Later in 1922 she began painting water-colours in which she allowed the flow of the colour to dictate the subject matter.

During the 1920’s she spent long periods in Dornach, studying anthroposophy and attended many of Rudolf Steiner’s lectures. Between the years 1925 and 1930 she appears not to have painted at all.

In 1932 she painted A map of Great Britain, in which she foresaw the London Blitz of 1940, perhaps. According to a great nephew Johan af Klint she had the gift of prophecy. In 1935 she moved to Lund, near Malmo and in 1940 Thomasine Andersson, her lifelong companion died. Later in 1944 she went to live with her cousin Hedvig af Klint in Stockholm. But later that year on 21 October 1944 she died from complications resulting from injuries received in a traffic accident. She was 81 years old.

On her death Hilma af Klint left more than 1,200 works of art and numerous notebooks. The notebooks detailed her thoughts, mediumship experiences and notes about her paintings. In one she stipulated that her work should not be publicly displayed until at least 20 years after her death.

Hilma af Klint did not have any contact with the modern movements of her time, yet is now generally considered to be the pioneer of abstract art. Her first abstract painting created in 1906, pre-dates Kandinsky’s by five years. The delayed appreciation of her work is due in part to her own wishes. She rarely exhibited and only showed her abstract works to a select few. In fact, it was not until 1986, when one of her abstract paintings was shown in a collective exhibition in Los Angeles, entitled The Spiritual in Art, did the general public see her work. In 2013 the Modern Museum in Stockholm hosted the first exhibition dedicated solely to her work and it was from this point that she is recognised as one of the foremost Swedish artists of her generation. 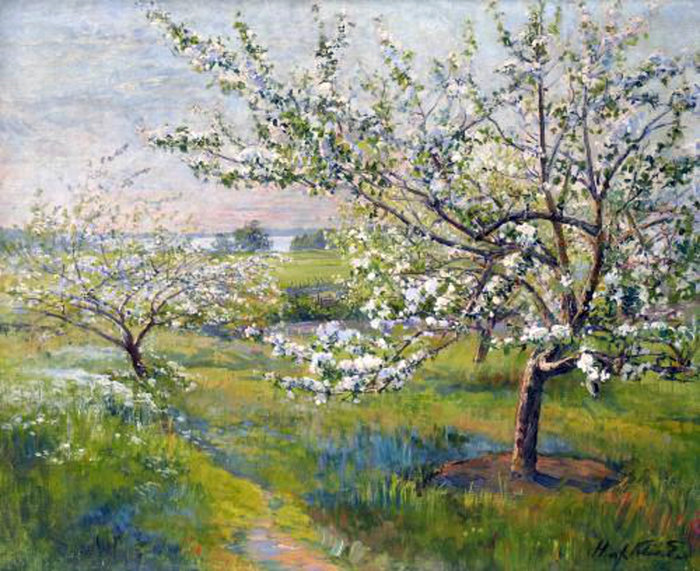 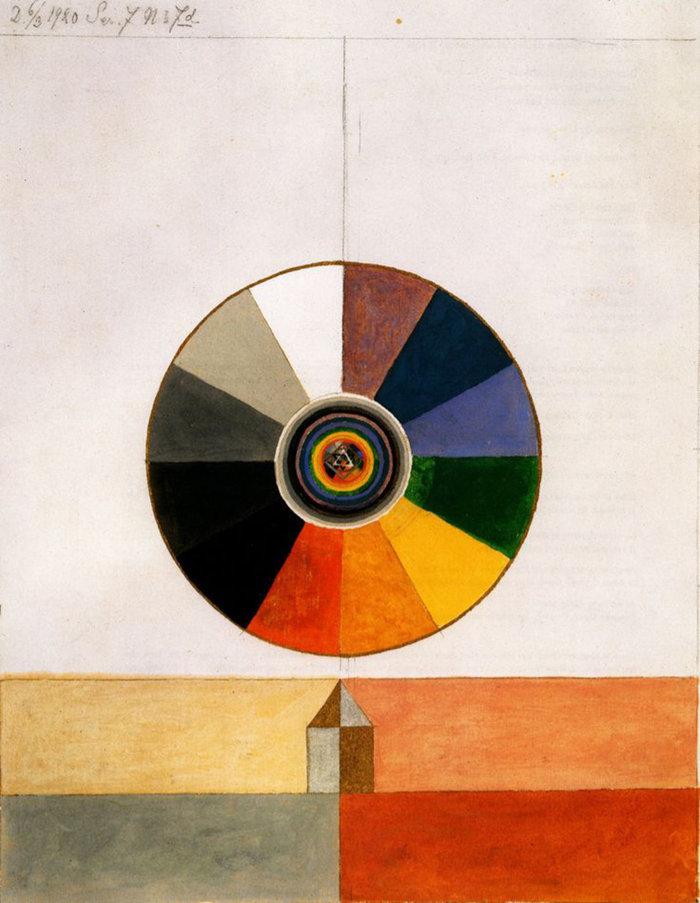 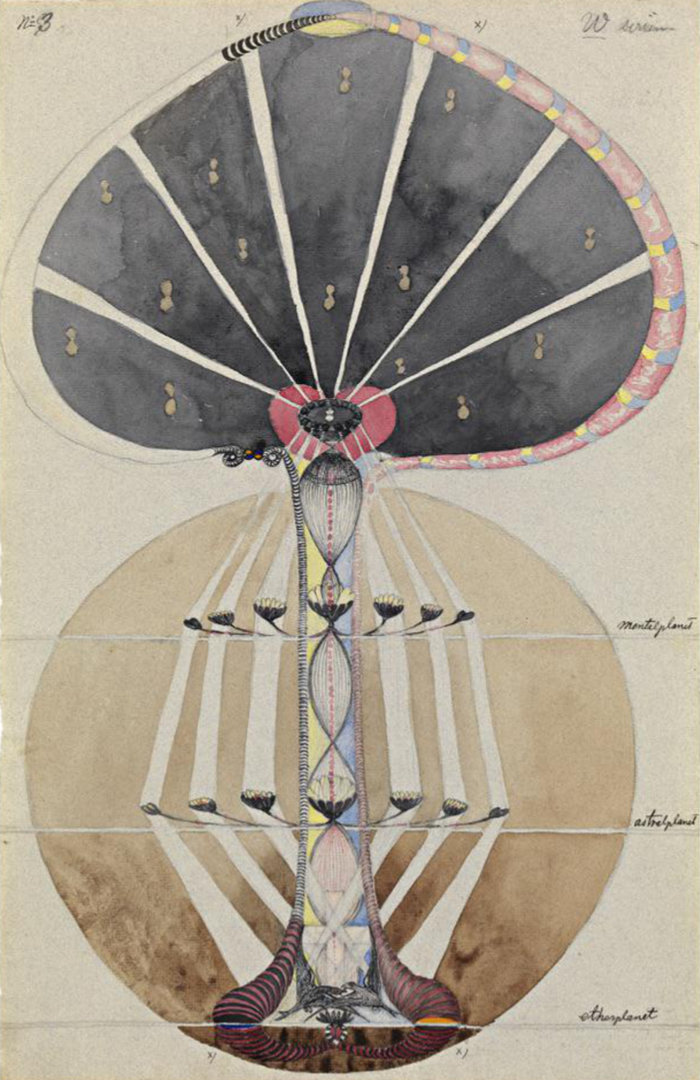 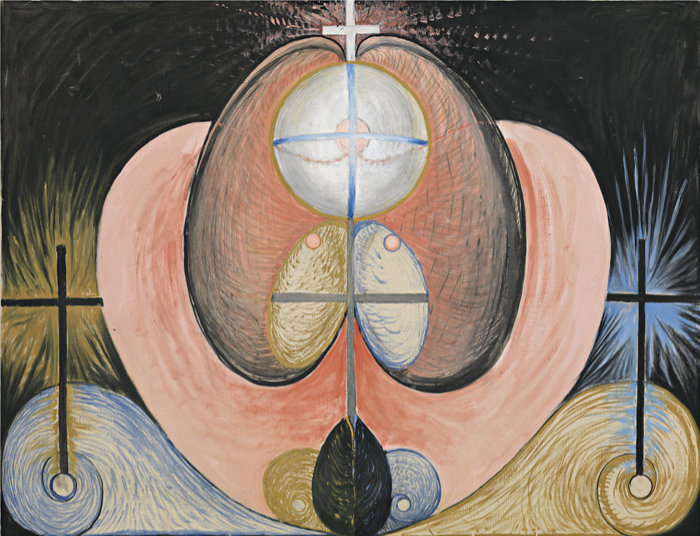