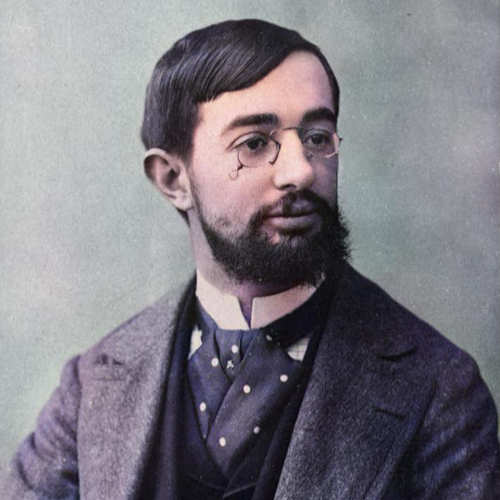 Toulouse Lautrec: The life of an Artist

Toulouse Lautrec was small in stature but a giant of an artist.  He was one of the most influential post-impressionist artists of the late 19th century.

Henri de Toulouse Lautrec was born in the Hôtel du Bosc in Albi, although much of his childhood was spent at the Chateau du Bosc, the home of his grandfather. His father was an avid hunter and womanizer, a true blue-blooded eccentric, not averse to dressing up in chainmail like his military ancestors. His mother, in contrast, was deeply religious and doted on Henri. However, his parents were first cousins and shared a grandmother. As a result, Lautrec was born, we believe, with a syndrome known as PYCD which causes brittle bones, abnormalities to the face and hands. Henri was the couple’s only surviving son; a younger brother having died in infancy.

In 1872 the Countess moved to Paris with eight-year-old Henri. He started school at the Lycee Fontaine where he met his lifelong friend Maurice Joyant. But Henri was often in poor health and in 1875 he returned with his mother to Albi. He was given private lessons and prescribed regular baths at the spa in Amélie-les-Bains to help him grow.

Aged fourteen, in 1878, he was still small for his age and in May that year he broke his left thigh bone in a fall in Albi. He was bedridden for months and spent his time reading, drawing and painting. No doubt encouraged by his father and uncle who were both accomplished draughtsmen.

In August the following year, he broke his right thigh when he fell into a ditch. Both legs stopped growing and all medical therapies, including electric shock treatment, proved ineffective. However, he was not, as legend has it, a dwarf, he was around 5 feet tall. But the contrast of the torso of a fully grown man and shortened legs, meant his physical appearance attracted much mockery and ridicule throughout his life.

In 1881 Lautrec failed his Baccalaureate in Paris, but with the help of Rene Princeteau, a professional artist who had given him art lessons since he was 14, he persuaded his mother to let him become an artist. In early 1882, accompanied by his mother, he moved to Paris and entered the studio of Leon Bonnat. The studio closed a few months later, so he joined the studio of the successful history painter Fernand Cormon. It was here that he got to know the painters Emile Bernard and Vincent van Gogh.

In 1883 it appears Lautrec had a relationship with 17-year-old Marie Chalet, it would be the first of many. The following year he officially left home after his mother’s disapproved of his love of Montmartre. Now began frequent changes of accommodation, firstly to the Rue Fontaine in Montmartre. Here he met Edgar Degas whose studio was next door, but later that year he moved in with his friend Rachou.

1885 was a significant year for his development. Rene Grenier and his wife, who he lived with for a while, took him to parties, dance halls and the cabarets, the Elysée-Montmartre and the Moulin de la Galette His favourite was Artistide Bruant’s Mirliton. Whilst his friends from Cormon’s studio, Emile Bernard, Vincent Van Gogh widened his artistic horizons and helped him find his own style.

In 1886 he left Corman’s studio and rented a studio on the corner of Rue Caulaincourt which he kept until 1897. It was here he met Suzanne Valadon who modelled for him. She was beautiful, strong willed and a painter, who became Lautrec’s mistress. He must have possessed a powerful attraction for her, as she was said to have faked a suicide attempt in 1888, after he refused to marry her.

The little artist was becoming a familiar sight around Montmartre. Often seen with his bowler hat and walking stick, particularly at night. Life settled into regular pattern, staying up late, drinking cocktails and wine, talking and drawing, working furiously and occasionally sleeping.

In 1887 he exhibited with van Gogh in Paris and developed an interest in Japanese prints. The next year the Belgian critic Octave Maus invited him to exhibit 11 paintings at the 20s exhibition in Brussels. Shortly afterwards Theo Van Gogh bought the painting, Rice Powder for the Goupil Gallery in Paris for 150 francs.

In 1889 he participated in the Salon des Indépendants and did so until 1894. During this period he painted a series of outdoor portraits in Père Forest’s garden in Montmartre. Later, in October the Moulin Rouge opened in the Blvd de Clichy. Lautrec became a regular visitor and had a table reserved just for him and his friends. He often displayed his work there too.

But Lautrec’s immersion in the nightlife of Paris began to take its toll. He was drinking hard and had contracted syphilis for which his roommate Dr. Bourges, was treating him. Yet, despite producing some of his most brilliant work over the next few years, the seeds of his self-destruction had been sown.

In 1891 he painted A la Mie, basing the painting on a staged photograph in which his friend Maurice Guibert played the role of a sleazy, low-life character in the company of an unidentified woman. Also, that year he was commissioned to create a poster for the Moulin Rouge. He produced La Goulou showing the 20-year-old dancer in action. The poster made him famous overnight especially, amongst the elite of Paris.

In 1893 Maurice Joyant organised Lautrec’s first large private exhibition at the Boussod Valladon Gallery in Paris. At the time he was living in a brothel. He was commissioned to create 16 paintings for the brothel of which The Bed is the most famous in the series.

It depicts two women lit by an oil lamp gazing at each other beneath sheets and blankets. He also created this poster of Jane Avril for her show at the Jardin de Paris. Her English chorus girl costume and more sophisticated and refined style led to a long successful career.

During 1894 Lautrec visited Amsterdam to study the paintings of Rembrandt and Frans Hal’s and in June and October visited London where he displayed his posters in the Royal Aquarium in London. In May 1895 Lautrec was again in London and met Oscar Wilde the night before his trial for gross indecency. They had met previously in Paris, but Henri’s request to draw Oscar’s portrait that night was refused because he was too nervous to sit. So Lautrec went back to his hotel room and captured the haggard anxiety and premature ageing of his friend from memory.

Lautrec’s second major private exhibition at Boussod Gallery in Paris took place in 1896 and attracted many visitors and some pictures sold. But he stubbornly refused to sell a painting to the old King of Serbia who he said was a vulgar pig farmer. In August of that year, he set off on a long journey to Spain visiting Madrid and Toledo. Later his friend Emile Bernard introduced him to the world of bicycle racing and he created these two prints on that theme.

In 1897 he took part in the Free Aesthetics exhibition in Brussels and in May, moved studio again to the Avenue Frochet not far from the Place Pigalle. He left this studio in 1898 leaving behind 87 works. The new tenants used some to cover holes in the wallpaper, the rest were sold for next to nothing.

His Life Style takes its Toll

Unfortunately, Lautrec found it hard to control his drinking and during the summer, spent in Villeneuve-sur-Yonne, he had an attack of delirium tremors. 1898 saw him exhibit 78 works at Goupil’s Gallery in London, but the exhibition was a failure. But he did produce a second lithograph album dedicated to the cabaret artist, Yvette Guilbert, the singer with the long black gloves, who would have a successful career in Britain and the US. But Lautrec was now rarely sober, and the quality of his work was diminishing. He spent that summer in Arromanches, but suffered a persecution delirium, hiding in a friend’s house believing he was being pursued by the police.

By 1899 he was a pathetic sight. Bouts of depression, obsession and anxiety were frequent. Unfortunately, when his mother left Paris to look after her mother in Albi, Lautrec’s drinking increased. In February 1899 Lautrec had an alcoholic fit in a brothel and was committed to a mental hospital in Neuilly by his mother. His mental state sparked many unkind remarks in the press, not that he was aware. He occupied his time drawing circus scenes from memory with coloured pencils. On 17th March 1899, his mother removed him from the hospital and paid an impoverished cousin, Paul Viaud to supervise him.

This seemed to work for a while and in 1900 Lautrec became a member of a jury to judge posters at the Universal Exhibition in Paris. He arrived in a wheelchair pushed by his cousin. But despite his cousin’s attempts to distract Lautrec with holidays to the coast and visits to the theatre, the drinking continued. Yet during this period he did create 6 paintings inspired by a visit to Isidore de Lara’s 1899 opera Messalina.

By 1901 despite numerous theatre visits, he had lost his lust for life. In March another fit caused a cerebral hemorrhage and paralysed his legs. From April he spent three months in Paris, settling his estate. On the 15th of July he left Paris for good. In mid-August, he had a stroke which left him paralysed on one side. On the 20th of that month, his mother took him to Malromé, a chateau she had bought in 1883.

Lautrec died in the Chateau on the 9th of September with his parents and his cousin, Paul Viaud by his bedside. He was just 36 years old. At the time of his death, it is estimated he had produced more than 900 paintings and watercolours, 5,000 drawings and 370 lithographs. His famous posters remain some of the best-known iconic illustrations of Paris, still loved and appreciated the world today. 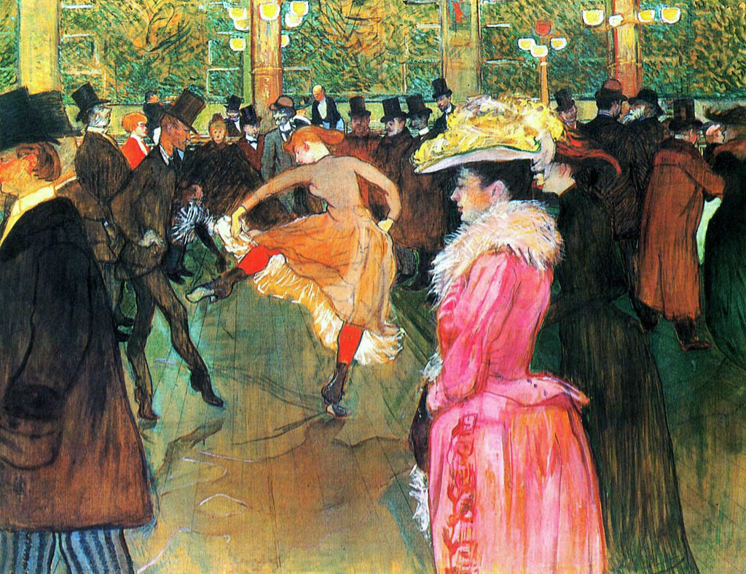 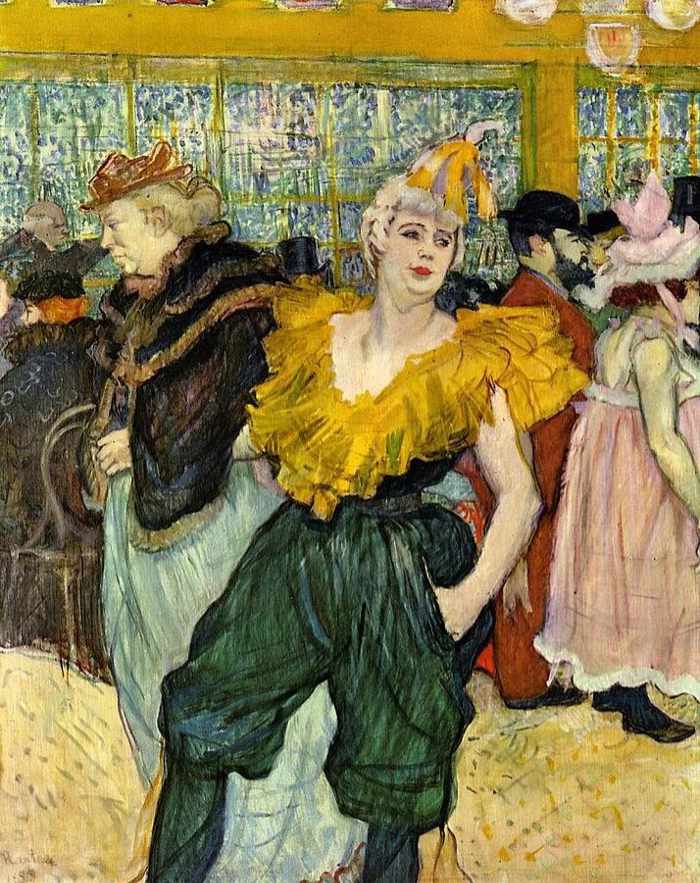 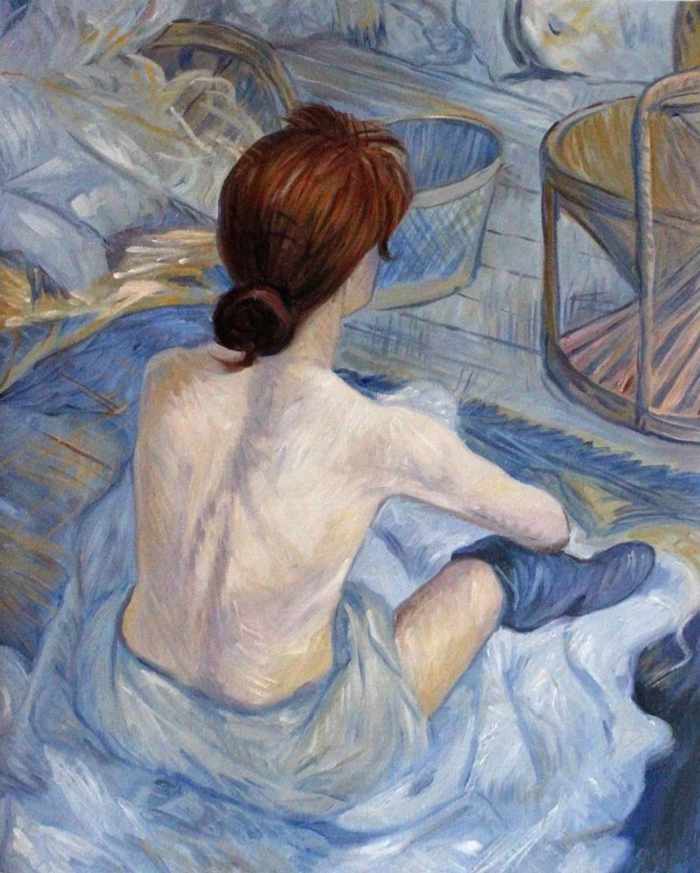 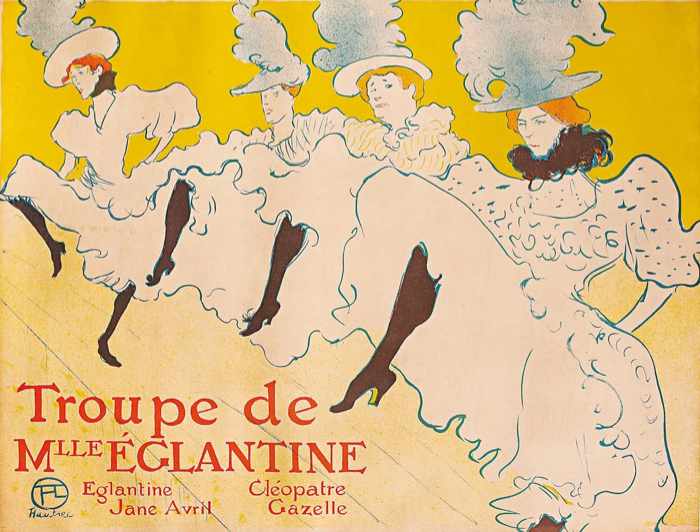