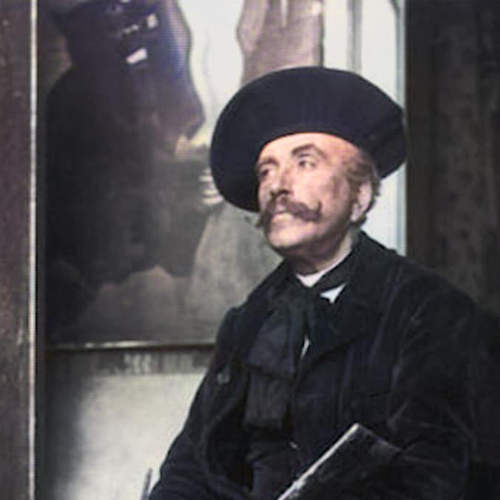 Henri Rousseau: The Life of an Artist

Henri Julien Félix Rousseau was a French post-impressionist painter in the Naïve or Primitive manner. Known as Le Douanier, a humorous description of his occupation as a toll and tax collector. He retired from his job to work on his art full-time at the  age of 49.

Henri Rousseau was known as ‘Le Douanier’ and was the most celebrated of the French naïve artists. He was completely self-taught and spent many years painting as a hobby. He accepted early retirement in 1893 so he could devote himself to art.

His nickname refers to the job he held with the Paris Customs Office (1871-93), although he never actually rose to the rank of `Douanier’ (Customs Officer). Before this he had served in the army, and claimed to have seen service in Mexico. This story is a product of his fertile imagination. He never actually left France. He was prone to exaggeration and often claimed some of his paintings were based on his memories of Mexico.

Although he is often referred to as a Naïve or Primitive artist, he is so much more than this. His work does indeed display a naïve quality, almost childlike in the quality of drawing. Yet, it also has a freshness and uniqueness that transcends childlike naivety. He is a perfect example of the kind of artist in whom the Surrealists believed: the untaught genius whose eye could see much further than that of the trained artist. In other words, he was not restricted by the teachings of academics and art college theories.

Henri Rousseau’s greatest wish was to paint like the great masters. He genuinely believed that his pictures were absolutely real and convincing. Fellow artists and the art world loved his work, his direct vision, and fantastical images, but the public were not convinced.

He suffered much ridicule (although he sometimes interpreted sarcastic remarks literally and took them as praise). This is perhaps best illustrated by the incident in 1908 when Picasso held a dinner in his honour. Picasso declared him to be one of the greatest painters of our age, a point to which Rousseau thought himself fully entitled. Picasso went on to present him, in front of a large crowd, with a large cardboard medal, much to the amusement of those present. Rousseau put his arm around Picasso and announced, ‘you paint in the Egyptian style and I paint in the modern style.’

However, his faith in his own abilities never wavered. This total confidence enabled him to take book and catalogue illustrations and use them for the basis of his jungle paintings. Yet, he often told anyone who would listen that the inspiration for his work came from the Mexican jungle. The tiger in his painting ‘Surprise’ was taken from a photograph in a book of zoo animals. The painting is often referred to as simply Henri Rousseau Tiger. The exotic plant life that filled his jungle paintings were actually grossly enlarged house and garden plants, or based on drawings he made at the tropical plant house in Paris. He was also a frequent visitor to the Paris zoo.

One painting perhaps sums up his work, ‘Boy on the Rocks’ (1895-97; 55 x 46 cm ) is an odd painting. The rocks seem to be a series of mountain peaks and the child effortlessly dwarfs them. His wonderfully stripy garments, his adult like face, the uncertainty as to whether he is seated on the peaks or standing on them, comes across as very strange. It is painted very much like a child would paint it. The idea takes precedence over the paintings execution. As a person Henri Rousseau was naïve, quite gullible with an almost child like view of the world. To an adult the painting is quite disturbing and slightly weird, but to a child it is perfectly understandable.

Henri Rousseau died penniless and was buried in a paupers grave. That would have been the end of the story had it not been for Picasso. He raised funds amongst fellow artists and paid for Rousseau’s reburial, complete with headstone bearing a poem by poet and art critic, Apollinaire. He was buried in one of Paris’s largest cemeteries, but his body now rests in Laval, his birthplace . 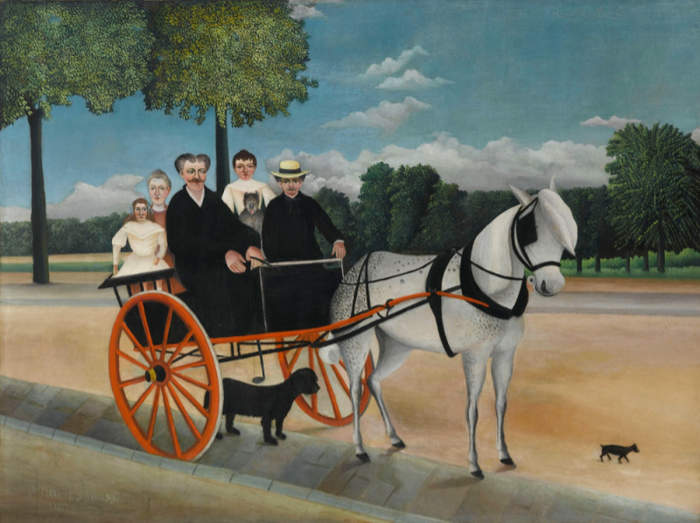 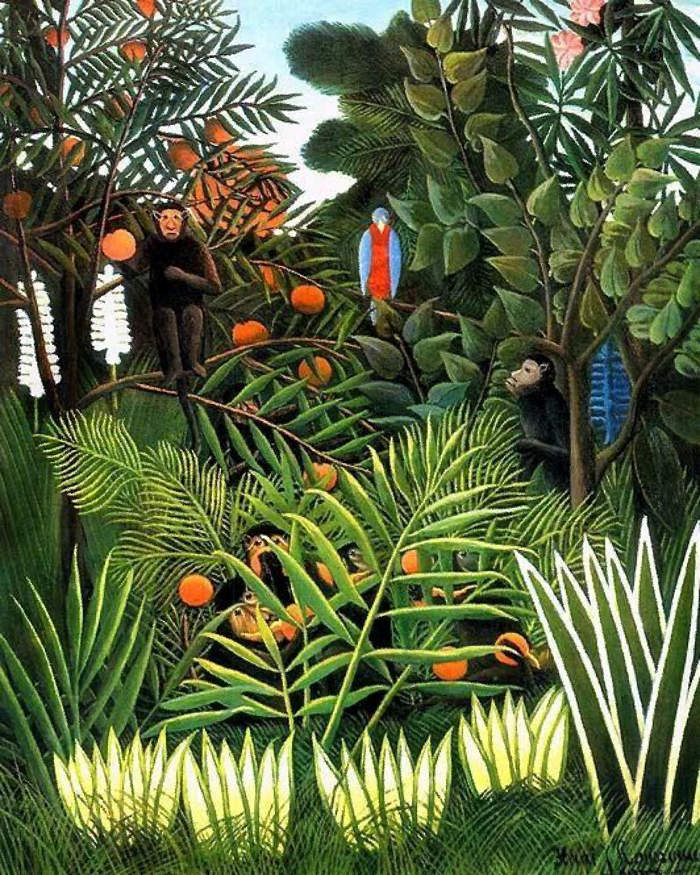 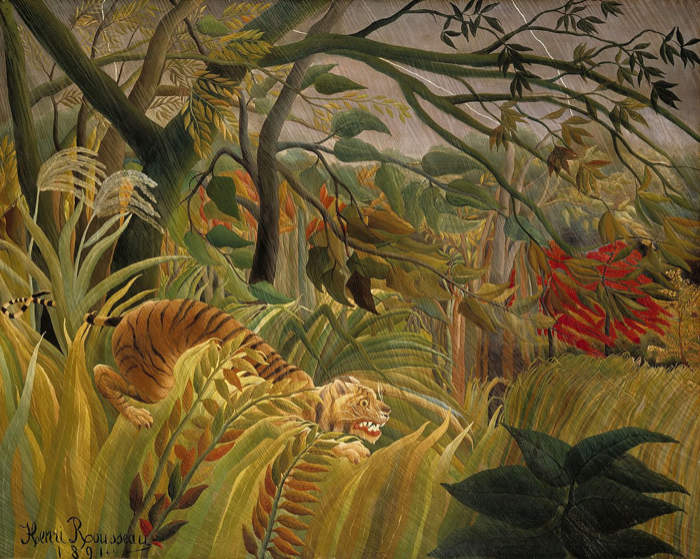 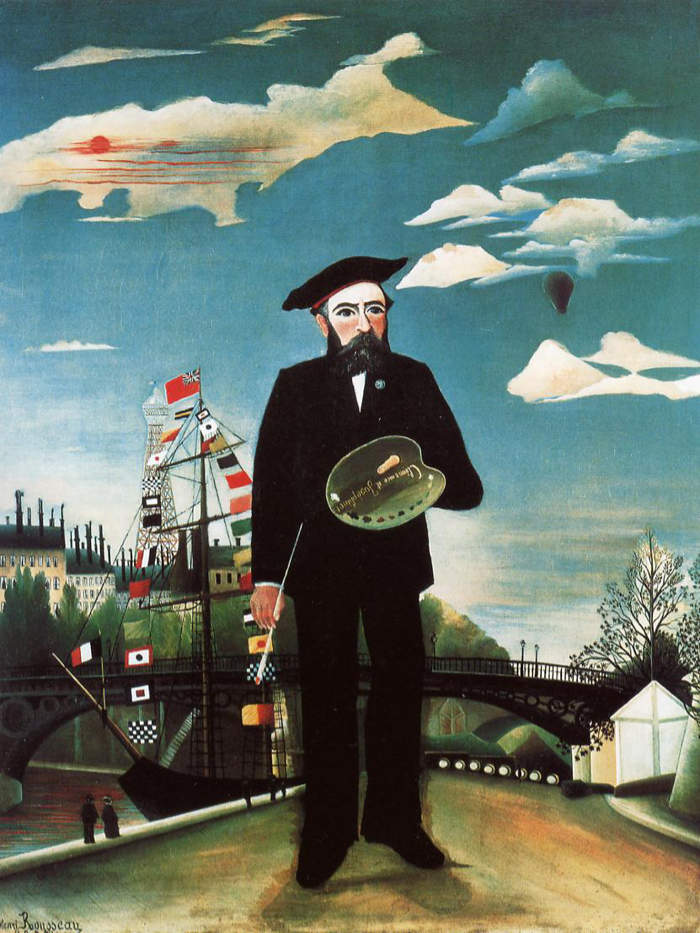